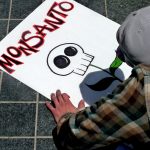 Ahhhh – there’s nothing like the smell of propaganda early in the morning. At least this must be what the higher-ups at the Bayer company think as they start their days trying to figure out how to spin pesticide data and influence the public.

Now, in breaking news, this Big Agra conglomerate – who in 2016 bought Monsanto for a cool $63 billion – is being forced to address some shady behavior exhibited by its newest acquisition. Turns out that Monsanto’s recently-revealed actions indicate a highly plausible attempt to inaccurately change the conversation about pesticide “safety.”

Pesticide secrets: A big company with nothing to hide wouldn’t do this – right?

A team of French prosecutors can be credited with blowing the lid open on a major snafu for the beleaguered Monsanto corporation and its parent company Bayer. Earlier this month, they filed a complaint alleging that Monsanto kept dossiers – let’s call them “cheat sheets” for people – on approximately 200 French journalists, lawmakers, and other folks deemed “influential” by the pesticide business.

Monsanto’s intent?  Simple: to access these people, influence their thoughts on pesticides, herbicides, and other chemicals of their ilk – and in turn change the global public’s view on these known harmful environmental toxins.

Sounds a bit desperate, right?  Think about it: the World Health Organization officially recognizes glyphosate (the prime ingredient in the weed killer Roundup, a Monsanto superstar) as a “probable carcinogenic.”  And, this happened four years ago.

Yet, despite this, Monsanto has still been trying to propagandize their enormously head-in-the-sand message that glyphosate has a “40-year history of safe use.”

Now Bayer has to act like the chagrined parent playing clean-up in the wake of this PR nightmare. We’ll at least give them some credit for owning up to the reality of these dossiers’ existence, as well as acknowledging that these are probably just the tip of the iceberg.

Bayer’s very own head of public affairs and sustainability, Matthias Berninger, made this eyebrow-raising statement to journalists: “It’s safe to say that other countries in Europe were affected by lists…I assume that all [European Union] member states could potentially be affected.”

He went on to indicate that while there weren’t signs of overt illegal activity, Monsanto was likely guilty of unfair access and use of private data.  Even so, French public-sector research institutes including Inra and CNRS are reportedly planning to file criminal complaints regarding mishandling of their employees’ personal data.

As if questionably obtained and disseminated private data about public citizens wasn’t bad enough, there’s even more damning evidence against Monsanto coming out:

The company alleged paid off well-known cancer researcher, Sir Richard Doll, for over two decades. The bribery alleged included a “consultancy fee” of $1,500 per day back in the mid-1980s – right around the time when Sir Doll miraculously concluded that Monsanto’s “Agent Orange” chemical didn’t cause cancer. Hmmm.

This despite the fact that the International Agency for Research on Cancer and the U.S. National Toxicology Program (NTP) both report that Agent Orange contains chemicals known to be cancer-causing.

That this scientist and researcher failed to disclose this financial information is damnable. But even more damnable is the fact that Monsanto allowed for (encouraged) this kind of biased research – something which has likely contributed to the harm, ill-health, and death of thousands of people.

Here’s the takeaway: major companies will go to extreme lengths to protect their profits and reputation. Beware of the hype and propaganda. https://www.naturalhealth365.com/monsanto-bayer-2994.html