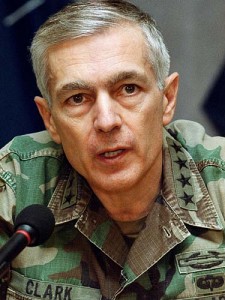 He formerly commanded NATO. From March 24 – June 19, 1999, he led naked aggression against Yugoslavia. For 78 days, hundreds of warplanes attacked mercilessly. About 3,000 sorties were flown.
Many thousands were killed, injured or displaced. Two million people lost livelihoods. Homes and communities were destroyed.

Lawless aggression was called humanitarian intervention. It was prelude for worse to come.